Yuri Pasholok got his hands on a pile of old military manuals recently, including Shooting from Horseback. It's a somewhat lengthy book, so I'm not going to translate all of it, just interesting bits.

"Peculiarities of firing from horseback

If firing a rifle from horseback is done mainly during patrols and other cases when there is no time to dismount, firing a revolver or pistol is often done by a cavalryman.

In battle, commanding fire from horseback is either very difficult or downright impossible. The soldier must rapidly and independently determine how to act, with a blade or revolver, and if the latter, fire, select targets, find an aiming points, etc. Actions of a cavalryman are further complicated by allied cavalry mixing with enemy cavalry. The cavalryman must fire in a way that does not injure his allies.

These peculiarities must be considered when teaching soldiers to handle their weapons. A soldier's ability to fight independently or in a group, display creativity and initiative, and knowledge of ballistics of his weapons are fundamentals of his training.

In this work, we make it our objective to share with the writer the practical and theoretical conclusions we have reached as a result of trials.

Trials show that the most effective rifle fire is at a target 100-150 meters away from the rider. Individual riders may effectively engage targets at larger distances. Fire from a revolver is effective at 50 meters when stopped and 35 meters on the move. A group of shooters may engage a target 75 meters away when stationary and 50 meters away on the move.

Precision of firing from horseback is affected by many factors that firing from the ground is not. It is dependent on, for example, the behaviour of the horse. The horse often impedes its rider's ability to shoot precisely, which is why every cavalryman must dedicate much attention to the training of his horse."

"Loading, preparation, and readying to fire from a pistol or revolver

In all cases, when the cavalryman's weapon is unloaded, load it according to NSD-3 when the command "Load!" is given. Keep your left hand on the reins and do not loosen its grasp.

While reloading on the move on horseback, the rider, without letting go of the reins, moves the revolver to his left hand, and with the index finger of his left hand, presses the magazine release. With his right hand, he catches the empty magazine and places it in his pocket or under his belt. Then he extracts a full magazine and inserts it into his pistol, all the way forward until a click is heard.

After that, the rider puts his right index finger and thumb on the rear of the slide, pulls it back quickly, and releases it (the finger should not be inside the trigger guard during this process). If there is no need to fire immediately, the rider puts his safety on and places the revolver in his holster."

A revolver with a magazine? This is a peculiarity of the Russian language in the interbellum period. Revolvers (namely the Nagant) have been the name of the game for a very long time, and self-loading pistols have only started appearing relatively recently. The term "revolver" is applied even to the Mauser C96 pistol in some Russian language manuals of this era. Delays in this new term spreading led to strange Finnish propaganda leaflets during the Winter War, talking about "self-loading revolvers" (pistols) and "fast-firing revolvers" (submachineguns).

"When the command "Ready to fire from horseback!" is given, the rider extracts his pistol or revolver from the holster, bends his right arm at the elbow, and holds it muzzle up to the right, at about chin level. The safety is off (fig. 1).

The positions for firing from a pistol or revolver are as follows: front (half-turn left and right) and back (half-turn left and right). In the event that the rider shoots forward, the rider gathers up the reins and sends the horse in a wide gallop. He then lifts himself up, puts his body forward, and raises the pistol or revolver above the horse's head (fig 2). 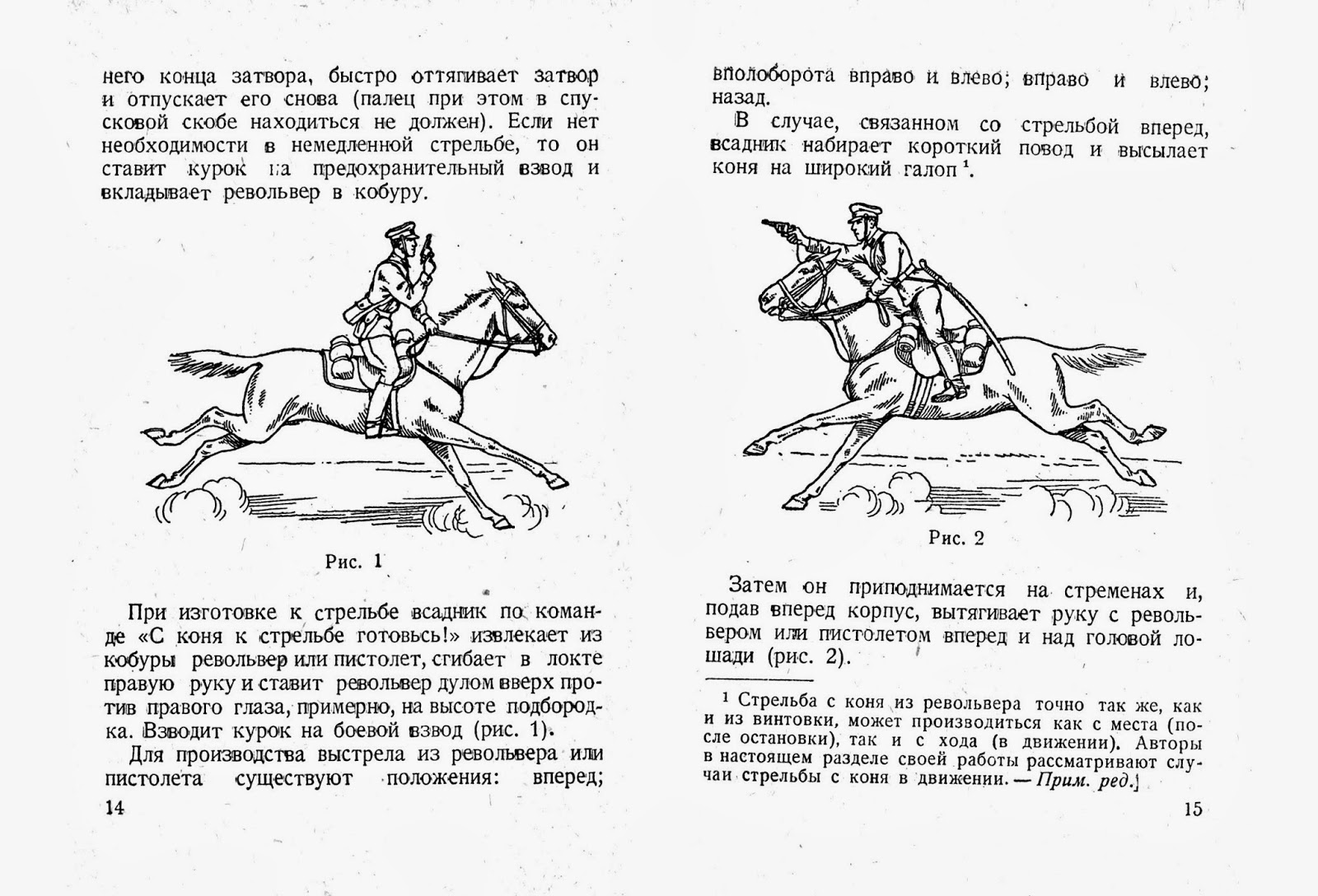 If it is necessary to shoot at a lying target, the rider points his gun downward on the right or left side of the horse. In order to not deafen the horse, the hand must be kept as far away from the horse's head as possible (fig. 3).

When shooting half-turned, the rider gathers the reins, braces his left hand against his horse, and increases the pressure on the stirrups. He then turns towards the target and sends the horse into a wide gait (up to 8 m/s).

When shooting left or right, the rider gathers the reins and sends the horse forward. With his left hand, he braces against the horse, increases pressure on the stirrups, and leans towards his target (fig. 4). 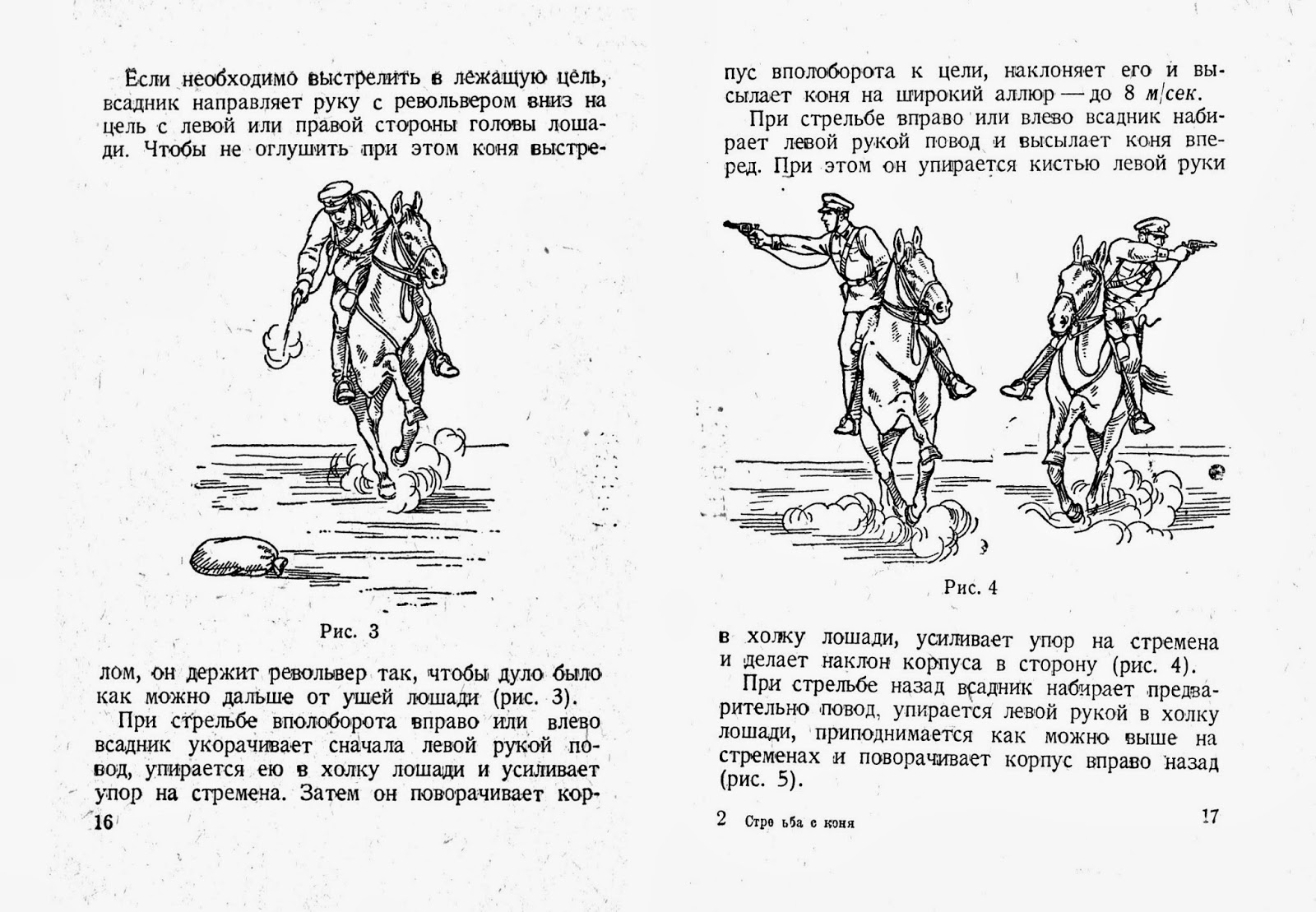 Of all the above positions, the most comfortable ones are shooting right, half-turned, or forward. The most difficult ones are shooting to the left and backwards. This leads to the conclusion that when shooting from horseback with a pistol or revolver, the rider must always position himself favourably against the enemy. If necessary, he must change the direction of movement. When shooting from a stationary position, rotate the horse into an advantageous position for firing.

Aiming and Pulling the Trigger of a Revolver of Pistol

The success of a shot depends on a smooth, and, at the same time, swift pull of the trigger. Shooting from a horse is shooting with open sights, which must be practiced with long and systematic training, both on horseback and on the ground.

When shooting from a stationary position, aim just as you would on the ground, through the center of the sights to the target. Here, the rider must only be careful to ensure that the shot coincides with the horse's exhaling.

Shooting from a horse in motion has its own problems, and differs greatly from shooting on the ground. Constant movement of the horse does not let the rider to line up his sights, as they jump around.

Due to these causes, aiming should be done not through the sights, but using the upper surface of the barrel. The sight line with this aiming will go above normal aiming. This is caused by an angle forming between the sight line and the barrel. At various distances, the deviation changes."

The rest of the chapter is simple math to figure out how low you have to aim, but there is a handy summary.

"The following diagram indicates that the vertical aim point should be as follows:

The chapter after this is composed of mathematical tables for compensating for the horse's speed when moving. Basically, aim a little bit in front of the target, since the horse will have moved you over to the proper place by the time you pulled the trigger. The revolver and pistol in question are obviously the Nagant and Tokarev. You will have to do your own calculations for other handguns.

There is also the dispersion for the Nagant. There is no table for a pistol, but the book promises that it is not more than 2-3 cm different. 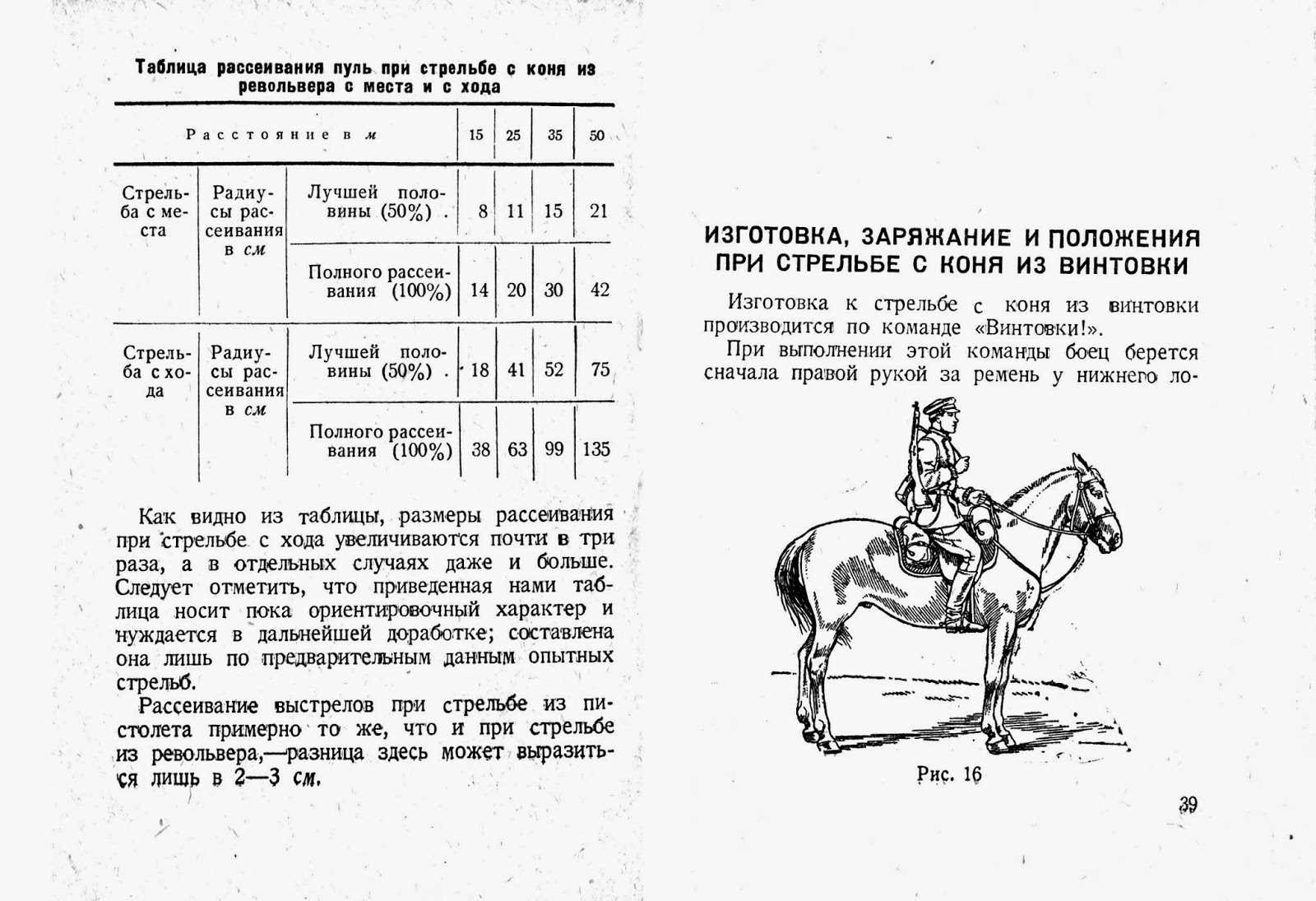 In cases when the rifle is not loaded, the soldier loads it when the "Load!" command is given according to rules in NSD-1. He must be careful to not point the rifle downwards at any time. After shooting is finished, the soldier takes the rifle strap in the middle with his right hand, flips it over his head with a swift motion, and lowers his hand (fig. 18). 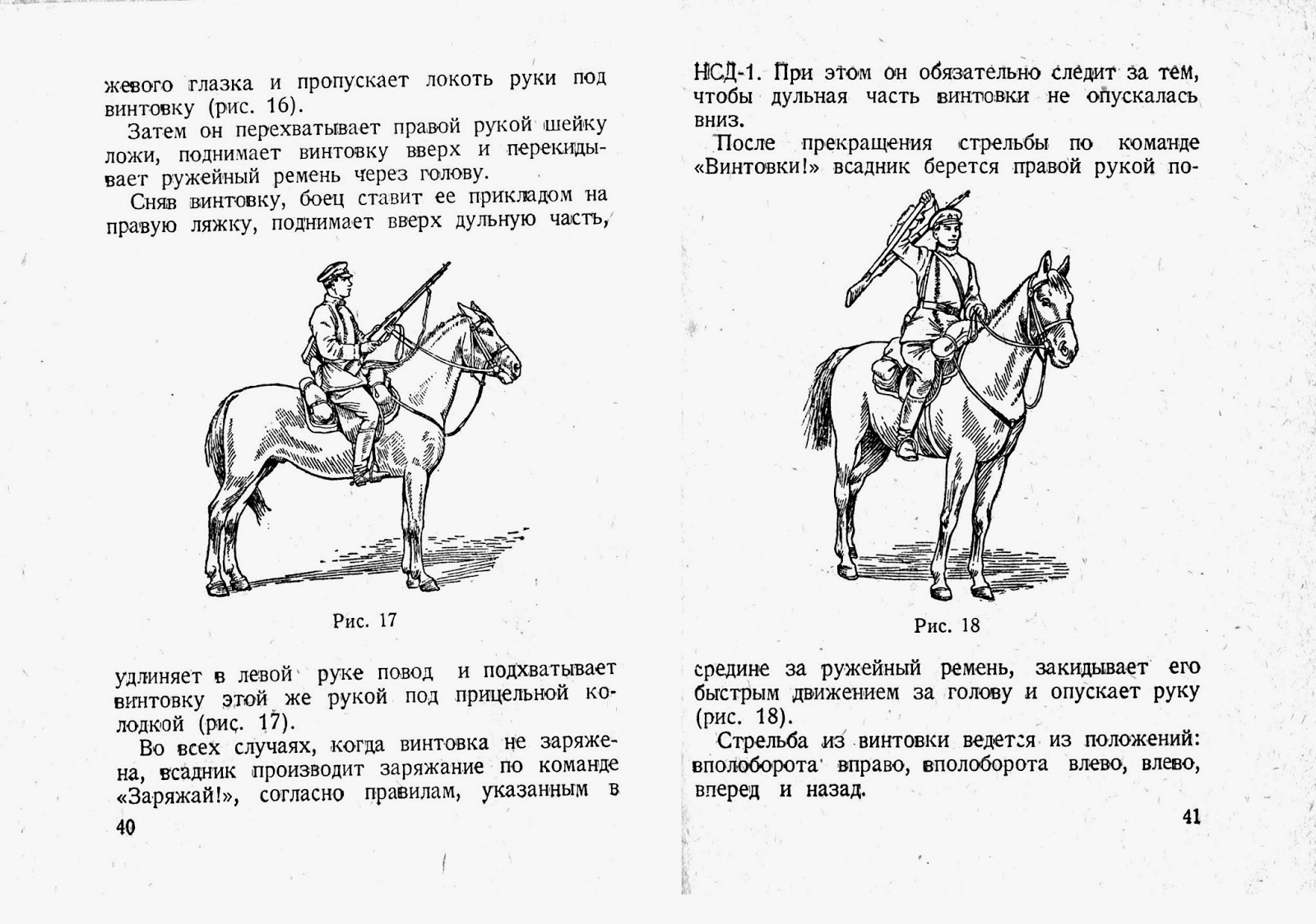 Shooting from a rifle is done when half-turned right, to the right, half-turned left, to the left, and to the rear. The most comfortable positions are half-turned to the left and forward. When preparing to fire half-turned to the right or left, the rider sits deeply in his saddle, turns his waist left or right (figs. 19 and 20), puts his stock to his shoulder, grabs the rifle with his right hand, and lifts it to his shoulder. The left hand holds the rifle underneath the sights and holds the lengthened reins. Do not loosen the reins too much, as the rider must feel the horse after a shot, and control him in case of unruliness." 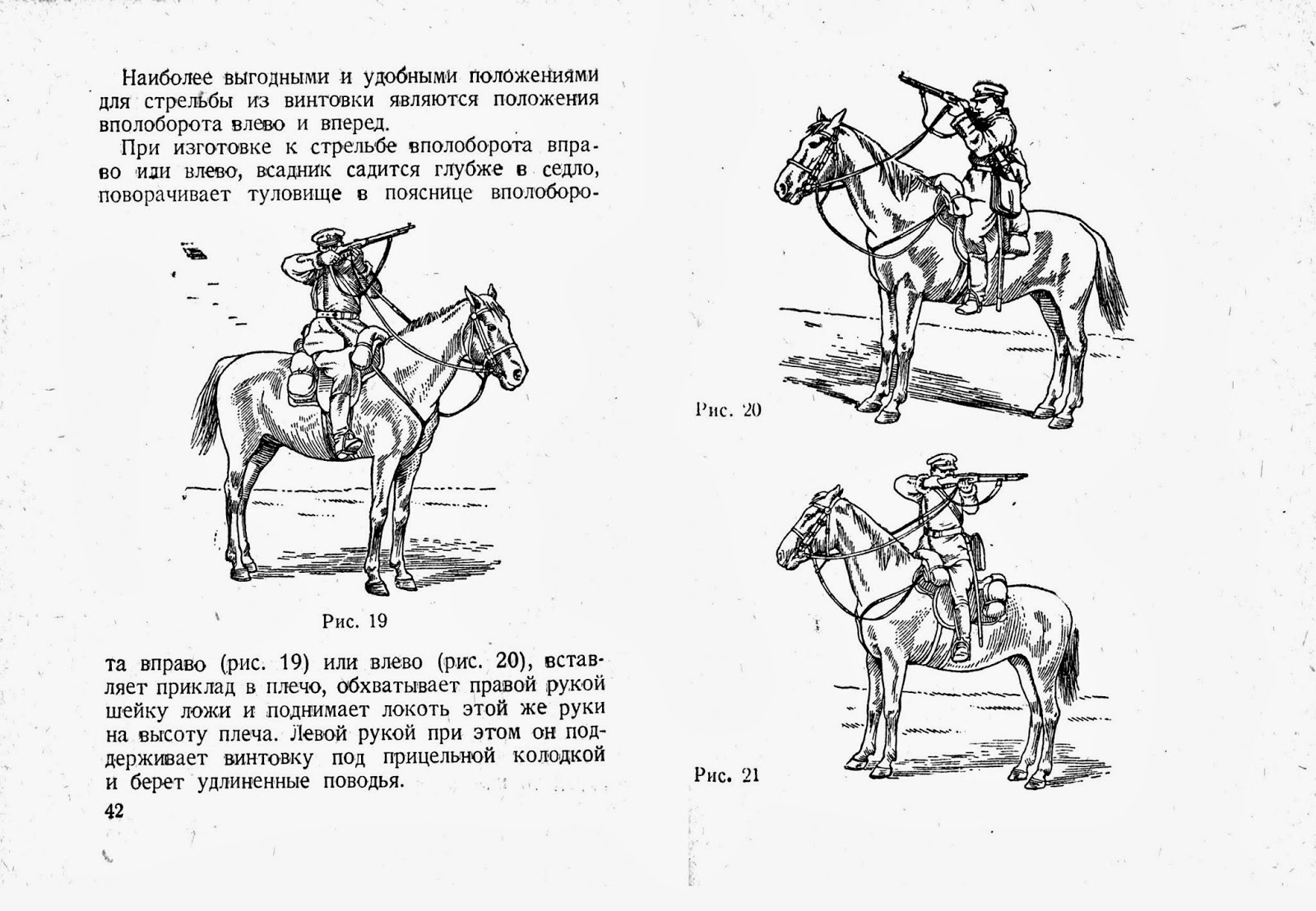 Shooting in other directions is largely the same.

"As you can see from the table, the rider has a small chance to strike a small target with these deviations, but shooting from horseback is done in exceptional cases only, and should not be done against small targets. It is clear that in this case, a rider may be disabled much faster than the target that he is aiming at."

The next chapter deals with leading your shot when shooting to the side, and is largely mathematical tables.

In this book, we aimed to answer questions associated with our investigations. It cannot be said that that we fully solved all questions of shooting from horseback, but practical things can be extracted from the above material.
Shooting at large distances is ineffective due to high dispersion."
at 14:00