Turns out, the first group was correct. However, these bombs came around long before Molotov accomplished anything of value, and didn't even have a proper name. In late May of 1915, Stavka's General on Duty wrote to the head of the Chief Military-Technical Directorate:

"The High Command Headquarters received several proposals for measures of repressing the enemy in response to their use of poisonous gases. These measures consist of burning the crops that are currently growing in Germany and Austria. In order to achieve this, we require widespread manufacture of incendiary devices of various weights..."

The answer to this need can be found later, in the GVTU's correspondence with the Office of the Chief of the Organization of Aviation in the Active Army, in a letter complaining about improper alcohol bottles mysteriously appearing.

"In order to produce incendiary devices for burning of crops, the Directorate acquired 100,000 empty wine bottles from the Petrograd Excise, which were prepared by a group of lower ranks under the supervision of the Chief of the Central Air and Sea Warehouse, as well as a specially appointed officer. The bottles were packaged by packagers of government wine warehouses. The GVTU, having developed this type of weapon, notes that the thick wine bottles may not break if they strike soft ground. Therefore, they acquired wine bottles from the Excise, and did not send other wine bottles, or beer bottles. The GVTU does not know how other wine bottles or beer bottles reached the army squads. The chief of Engineering Supplies of the South-Western Front also informed the Directorate that only vodka bottles have been sent out."

Such confusion! It is not surprising that the devices never received a proper name.

Let's skip forward a few decades and look at Soviet application of these incendiary devices. 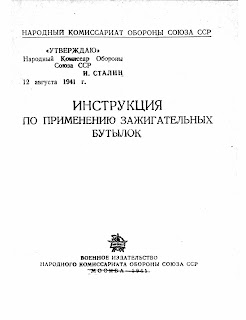 "Instructions on the use of incendiary bottles", approved by Stalin himself on August 12th, 1941.

"1. The purpose of incendiary bottles.

Incendiary bottles are one of the simplest and most reliable means for destroying tanks, armoured cars, transport trucks, warehouses, landed airplanes, and enemies in cover. In the hands of a brave soldier, they are a fearsome weapon. Skilled and sudden use can not only strike the enemy, but cause panic and compromise enemy organization.
The bottles work as follows: when they hit a solid object, the bottle breaks, and the liquid inside of it ignites, either with a match attached to the bottle, a special metallic igniter, or a capsule inside the bottle.
The Red Army uses bottles with:
2. Properties of flammable fluids

The two mixtures vary in colour. Pure KS fluid is yellow-green in colour, and the fluid with additives is dark brown. The unit weight of the first is 1.8, second is 1.4. Both fluids smell like rotten eggs. When exposed to air, they ignite at a temperature of 800-1000 degrees, creating a large amount of white smoke.

The sticky KS fluid, when impacting a tank or car, covers the view ports and glass, and heats up tank parts on impact. The smoke blinds the crew, fluid that seeps inside the tank destroys the engine, and can ignite the gas tanks. The crew is forced to exit the tank. When this fluid comes in contact with clothing, it sticks to it, quickly penetrates, and can cause severe burns. One bottle of sticky KS fluid burns for 2-3 minutes.

Pure KS fluid has similar properties, but sticks less, and does not burn as long (for 1.5-2 minutes). It is very hard to put out KS fluid fires. It can be put out with sand, dirt, and water. Note that in events of insufficient dirt coverage, or when the water evaporates, the fluid can ignite again.

Mix #1 is a viscous substance, yellowish in colour, with unit weight of 0.8. It excels at spreading out over metal surfaces and sticking to them. The fluid ignites with special devices (igniters). It burns at temperatures of 700-800 degrees, and lets out small amounts of black smoke when burning. One bottle burns for 40-50 seconds. After burning, a hard and opaque film remains. Properties of mix #1 are identical to the sticky KS fluid.

Put out fires from mix #1 with sand, dirt, water, by covering it with a greatcoat or tent. After putting out the fire, it will not start again by itself.

Mix #3 is less viscous than mix #1, with unit weight of 0.9, and ranging from brown to light lemon in colour. It burns for about one minute. Otherwise, it is identical to mix #1.

Regular beer bottles, 0.5-0.75 liters in volume, are used (fig. 1). The bottle contains a layer of water or kerosene to prevent the fluid from coming into contact with air. The bottle is closed with a rubber cork. The cork is reinforced with metal wire and tape.

The bottles are placed in wooden crates for transport. The crates are filled with dirt. Use loose, clay-free dirt, so that the package is lighter. The size of the crate should be such that the bottles could be covered with dirt from all sides. The dirt should go up to at least the corks. The top and bottom of the crate should be clearly marked. When transporting the bottles, follow the following precautions: 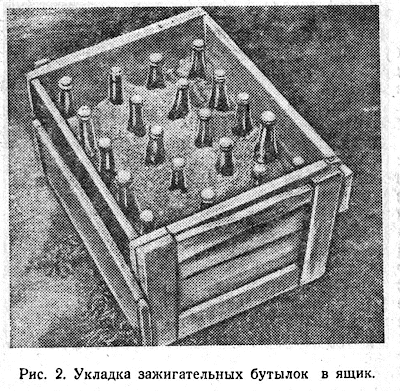 Fig. 2. Incendiary bottles in a crate.

When carried, the bottles should be placed in bags with barriers (fig. 3). If no such bags are available, use rags, paper, hay, grass, etc. During normal movement, carry the bag over your shoulder. When running, hold the bag with your left hand and prevent it from hitting anything. 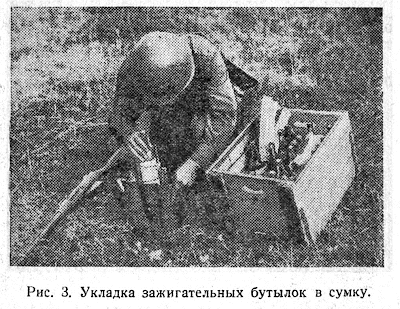 Regular vodka bottles, 0.5-0.75 liters in volume are used. The bottles are filled with fluid and closed with a wooden cork. The bottles are equipped with special matches (fig. 4), glass capsules, or metallic igniters.

The match consists of a wooden stick covered in an incendiary substance (fig. 5). Two are attached to the cylindrical part of each bottle with rubber bands. The matches are ignited by friction before throwing the bottle.

Glass capsules (fig. 5) are filled with fluid that ignites when it comes in contact with the incendiary fluid. The capsule is placed in the bottle, and activates when striking a tank or car. In order to make placing capsules in the bottle more convenient, each cork should have a string through a hole in it. 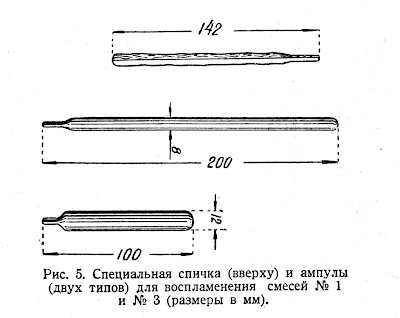 Fig. 5. A special match (top) and two types of capsules for igniting #1 and #3 mixes. Sizes are in millimeters. 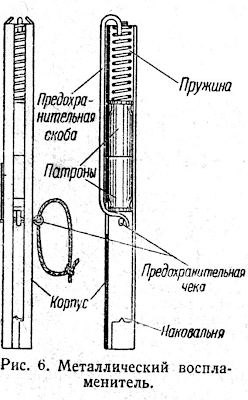 Bottles with incendiary fluid are placed in the same crates as KS bottles. Each crate contains the needed amount of igniters (one capsule or metallic igniter for each bottle, or two matches wrapped in paper), and one strip of sandpaper for every three bottles (for bottles with matches). Transportation rules are the same as for KS bottles.

When issuing bottles with #1 and #3 mixes, each soldier receives one strip of sandpaper, and a necessary amount of matches wrapped in paper. The soldier then inserts the matches into rubber bands on the bottle, leaving the paper on them. The incendiary substance on the matches should be pointed towards the bottom of the bottle. Place the glass capsules inside the bottle. Tie metallic igniters to the side of the bottle.

In order to destroy enemy tanks with bottles, each soldier should carry 3 bottles, one with KS fluid and two with #1 and #3 fluid. The soldier positions himself in a trench, crack, shell crater, behind a fence, in a hole, a ditch, or any other concealment (fig. 7 and 8), camouflaging himself and hiding from bullets and shrapnel. 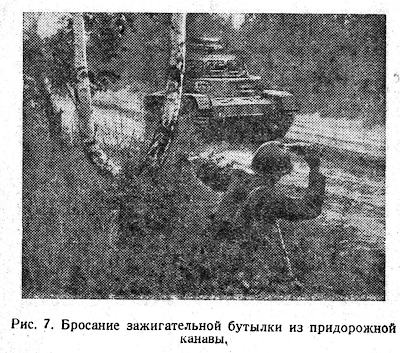 Fig. 7. Throwing an incendiary bottle from a roadside ditch. 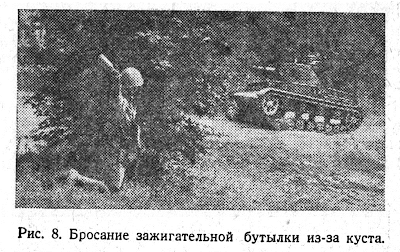 Fig. 6. Throwing an incendiary bottle from behind a bush.

The soldier observes tank movements. When they approach, the soldier prepares his bottles for throwing. If his bottles use matches, he tears off the paper covers.

When the tank or car is 15-20 meters away, the soldier takes a KS bottle, holds the cylindrical part, and throws it at the tank, followed by one or two #1 and #3 bottles. If the bottles have matches, light them before throwing. #1 and #3 bottles may be held by the neck, if it is more comfortable. Throw bottles with metallic or capsule igniters in the same manner as bottles with matches, after the KS bottle (if several types are available).

Throw the bottles while standing or crouching (fig. 9), aiming for your target. Aim for the engine (a tank has it in the rear, an armoured car in the front), observation ports, poorly sealed hatches (fig. 10). 2-3 well placed bottles can ignite the tank or car (fig 11). 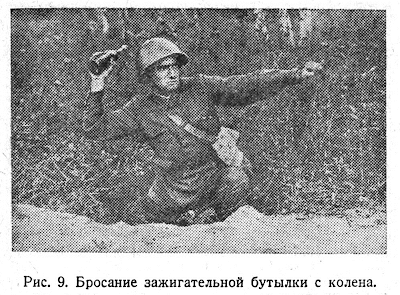 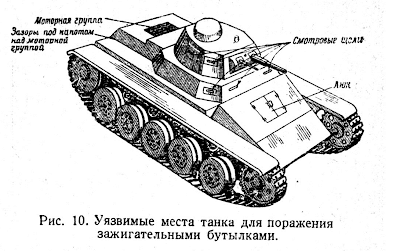 Fig. 10. Vulnerable parts of a tank for incendiary bottles. 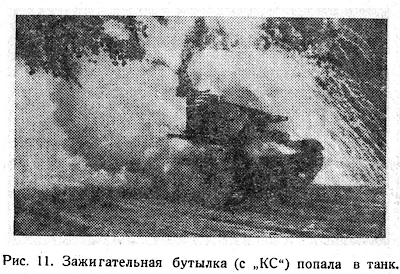 Directions for a tank destroyer group

A tank destroyer group consists of 2-3 soldiers. One or two have incendiary bottles and grenades. One has a machinegun or a submachinegun, and is the commander.

After receiving a mission, the commander must:
Groups position themselves as indicated on fig. 12, pointed towards likely directions of enemy tanks. Intervals between groups should be no more than 25-30 meters. Communication is performed right-to-left. 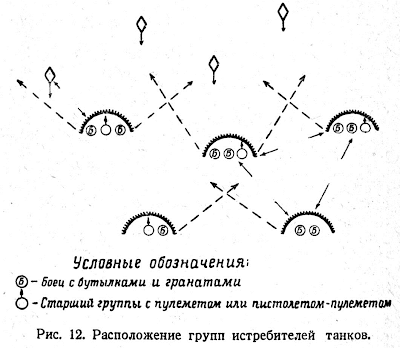 Fig. 12. Positioning tank destroyer groups. (Б) is a soldier with bottles and grenades, (  ) is the group commander with a machinegun or submachinegun.

When the tank is 15-20 meters away, the commander gives an order: "At the tank, fire!" On this command, the soldiers throw bottles (fig. 13 and 14) and when the tank catches fire, grenade bundles at its tracks. The commander looks for the enemy crew, and then eliminates of captures it. 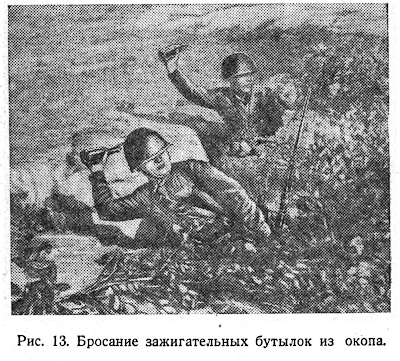 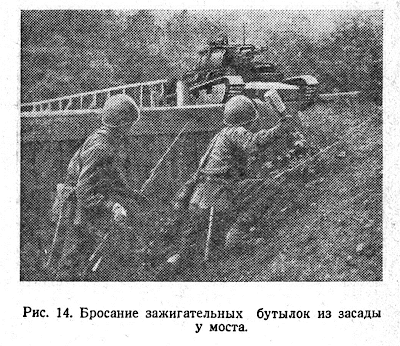 Fig. 14. Throwing incendiary bottles from an ambush at a bridge.

When the objective is complete, or when the group is out of ammunition, they stealthily retreat to a previously arranged spot, determined by the unit commander.

After receiving his objective, the unit commander must:
The unit acts in a manner to let the front of the column through, and then strike the whole column simultaneously (fig. 15 and 16).

Incendiary bottles are a powerful weapon. Their success depends on your bravery, agility, and resolve. 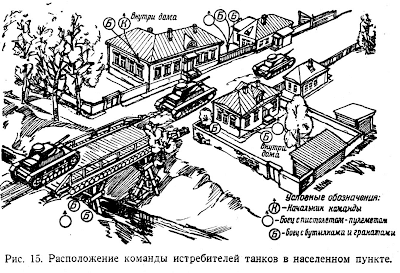 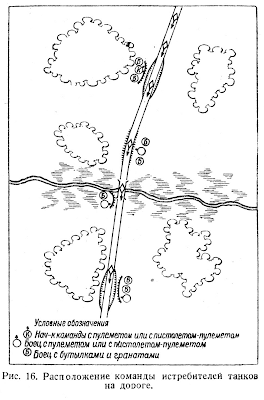 In trenches, incendiary bottles, especially KS bottles, should be kept in separate sections. When setting up a storage location, place them in a small pit or a location where they are safe from impact.

Handle with care. Ensure that they do not knock against one another or hard objects. If a bottle breaks, remove all other bottles from the vicinity, and cover it in dirt. Make sure that the fluid does not come in contact with skin or clothing.

If the fluid gets on clothing, immediately remove the affected clothing, or separate it from the body with sand, dirt, water. Until medical aid can be administered, keep a wet towel or rag in contact with burnt skin.

Chief of the Military Chemical Defense Directorate of the Red Army, Major-General of the Technical Forces, Melnikov